Hi all, it's me again, hoping to fill you in on what I've been up to, First, I think I'm dispensing with Wordpress, as I don't have any followers on there that I don't have here, does that matter you may ask, not really, but it's nice to get feedback. and I haven't really got the time to keep checking on so many blogs.

I like everyone else, was very upset to hear that Chip had lost Sam, I'd got to know them over the past year or so, and being a dog lover took interest in his goings on, it is just so sad and very upsetting when your best friend has to be given that final sleep, I know the feeling only too well,  I've had to do it several times.

Just before I read about Chip and Sam, I'd been contemplating having another dog, Tango is 13 in a couple of weeks., if I have him for another two years I will consider myself lucky, if three, I will be well blessed.
When my friend Sue had Tango when I went to Jersey, it came to her that when his life is over I will be a basket case, and she knows me well enough to know how true that would be, so we started making enquiries. I was contacted by an old acquaintance from way back, Eddie, with an offer of a bitch she had that needs a home, she's 8 yrs old. Sue and I had planned to go to-day to Dorchester to meet them, Ruby she is called, they were  coming from Devon,
Well the snow put paid to that didn't it! so we're going on Sunday, weather permitting.

When I got up this morning I discovered that we hadn't escaped the snow after all, [I was feeling a bit smug we hadn't had any]  it was 5" deep in places and still falling. A couple of phone calls to cancel the meeting and   got togged up to take Tango out, I thought, that was easier said than done, 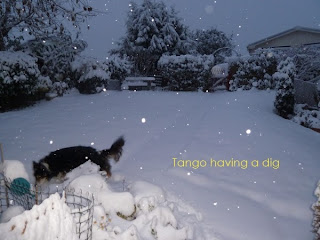 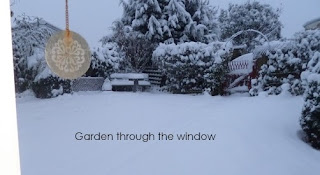 My car was an unrecognisable heap of white, and the drive down was a beautiful pristine ribbon . 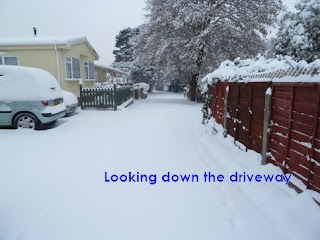 I abandoned the idea of taking the car and decided to walk, down the drive, turn left , a bit further turn right an on to the main road., to the left Highcliffe, to the right, New Milton 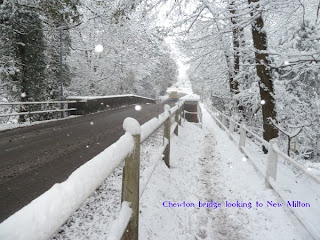 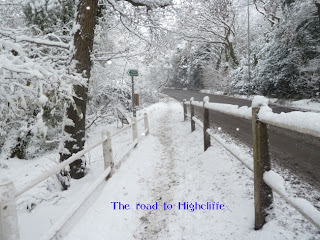 Just to the left of the Highcliffe picture there is a footpath sign, it leads down to Chewton Bunny, which is an old smuggler's path., bringing contraband goods from the beach to be taken to Christchurch. It's a walk I go regularly, it leads to the sea trough a pretty woodland with a stream running through the middle. We decided on that one to-day. 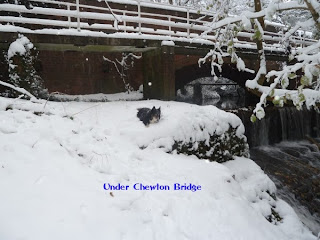 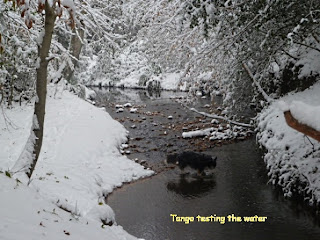 Isn't he brave, ??or daft. brrrrrrrrr it must have been cold 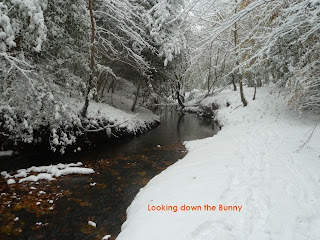 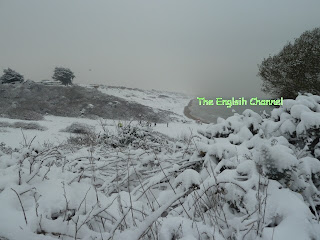 A gentleman was taking pictures and I asked him if he would take one of me and Tango. and he kindly agreed. 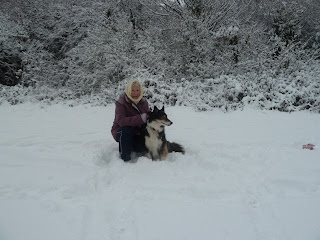 Me and my best friend 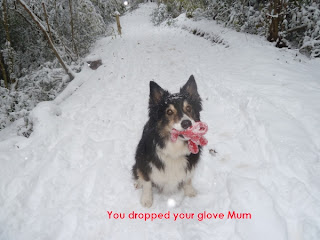 I think that's it for now folks, way past my bedtime, I hope you haven't been bored, but there were so many photos to choose from. We don't get snow very often, so I thought I'd take the opportunity to take these just for the memories