Where did the weekend go, one minute it was Thursday and now it’s Monday,
I know Thursday I went out with Sue and all the dogs for a New Forest walk, it was a blazing hot day , we had 6 dogs between us who all thoroughly enjoy the day too, though Stroodle didn’t like the horses getting too close and chased them away.
I had my hair cut in the afternoon, all short again, easier.
Friday,  Karen my younger daughter came up for lunch, and Saturday I had to spend getting everything ready for the dog show I was judging on Sunday, plus doing the usual chores.
The show was at Petersfield only about 60 miles away but as we had to be there by 8 am it meant a 6.30 am start. When I arrive I have to walk the dogs, set up my round and erect the tent, which is always a hilarious job and takes longer than it should, despite idiot taping all the poles.
Judging started at 9 am  and we finished around 5 pm, The weather was short of the blazing heat of a couple of days ago, it was overcast, occasional splats of rain and chilly, I ended up with an extra cardi, gloves and a scarf!!! Unbelievable,  a drop of about 10 degrees in two days.
Sybil, my friend who was helping out, took a photo and if it looks OK I’ll post it up later.
To-day I was tired and had shopping to do, so after the shopping I thought I’d have forty winks, that turned into almost two hours.
So out with the dogs to wake me up and on the computer to fill in the gaps, as I’m out to-night.
On Saturday I decided to cook some chicken for lunch, put it in the microwave with a cover to stop it splattering and pressed the ‘chicken’ button to cook for 20 mins. Ho hum, I had pressed the button for oven cooking not microwave and the cover I put on was plastic and here is the result. 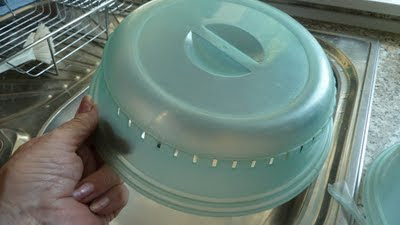 FROM THIS..
Obviously it's not the same, lucky I have this spare
... TO THIS 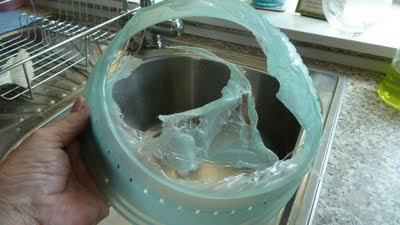 Thank you for visiting and please come back, Arlene, Tango and Ruby
Posted by Arlene at Monday, June 06, 2011