Yesterday I decided to try a new recipe I'd seen it in my cook book a few times and thought it looked tasty, Celery and cheese loaf. I had some celery left over and bought the cheese, a good strong Cheddar. It was a bit of a fiddle to prepare, as three large stalks of celery had to be chopped small, and the cheese grated, plus some crushed garlic. When the dry ingredients were mixed they had to be binded together with egg and milk, That I was not happy with as the dough was too wet and I couldn't knead it as it was a bit gooey, I had to add more flour and make a note in the recipe to cut down milk, [should I make it again] When I finally had the mixture to my satisfaction I plopped it into the tin and baked it, The result? it was surprisingly OK , very cheesy tasting celery flavour came through with a hint of garlic, with some butter it made a nice accompaniment to the soup I'd made the day before. I just might make it again. 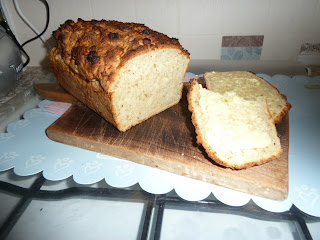 To-day, not a lot happened to-day, I picked Barney up to take for his walk, and we were llucky to get out and back before the expected rain, then again this evening tango, Ruby and I managed another dry walk, lucky, as it is pouring down now, feels more like November than August., such topsy turvy weather we're having, three seasons a week.
I met a lady who'd picked up a baby hedgehog, it was on the road as she was worried it would get run over, she was going to release it down at the wooded area of Chewton Bunny, I said I thought it was too young to fend for itself and offered to take it to the vet and have it checked over, if it was passed fit, their wildlife officer would release it back to where it came from, if not it would be fattened up first failing that,  kept till next spring . Good luck little hedgehog I hope he'll be all right.
After a busy morning Tango was happy to have a well earned rest. 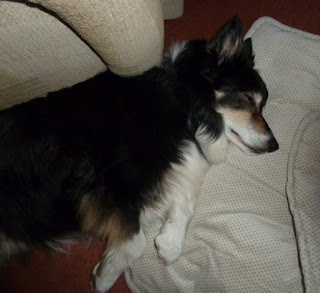 That's it for now folks, nearly bedtime and the dogs will have to brave the wet for a night comfort break.
Posted by Arlene at Friday, August 24, 2012