Hello folks, I am at last finding time to catch up on my blogging, I've had such a a busy week went through a spell of not sleeping too well, and wanting to nod off at all times of the day. i had a good night last night so felt much better to-day.
My birthday was the best i can remember having,My friends Nicky and Sue dropped by and gifted me. the on Saturday we had our family picnic, we went to a local beauty spot in the New Forest called Wilverly Plain, It was a nice day but a little windy, though we managed to find shelter behind a bank of hawthorn, we had eleven people including myself and nine dogs, Tables and chairs were set out and all laden with goodies, including wine. There were quite a few horses milling around, and Karen was a bit concerned in case her dogs decided to chase, but there were no incidents. There were several groups of people enjoying the day and having their picnics, we decided to have a game of rounders, and the group next to us suggested we join forces and pick teams from each other, I had three goes at batting and missed them all , but I did have a half way round run. Little Tommy my great gr;son thought it was great fun but insisted on picking up the ball when he had to run.
I had Saturday to recover and catch up, then on Monday, Arlene and Karen took me out for lunch to a rather select hotel  Rhinefield House in the New Forest, lovely meal, We then went on to Burley Village in the Forest, unfortunately it  poured with rain and it was a case of running from shop to shop, but it was part of the adventure, we were then going to go on to Beaulieu for a cream tea and a visit to the garden centre, but we didn't leave enough time, instead we went to a local garden centre and had some tea and cake there, I got home around 6.30 pm gave the dogs a quick run and flopped into the armchair.
Next day I was being taken to lunch by two friends from our dance club, I met them at 1 o'clock, when I got there the word had been passed around and twelve of us made up the complete party, another lovely surprise,
I had so many flowers and presents and good company, is it any wonder I say it was one of the better birthdays. Here are some photos of my flowers, I didn't take any photos of the days out, but I'm hoping maybe someone else will have. 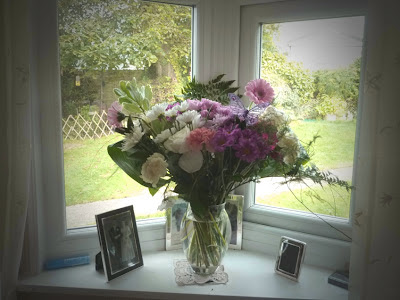 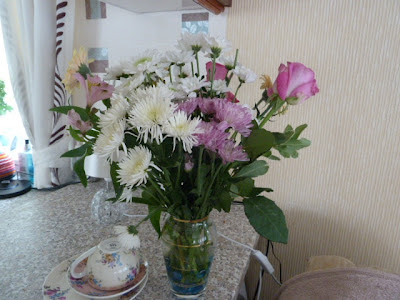 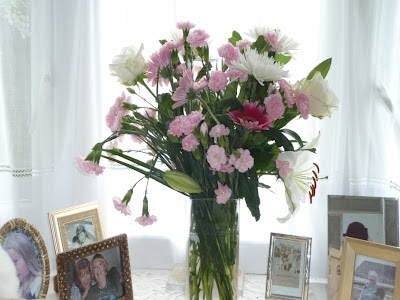 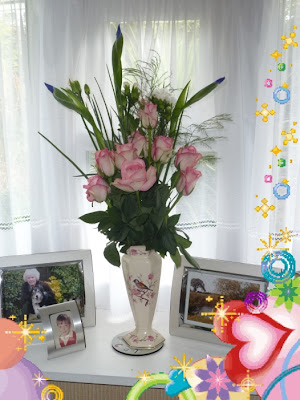 I was having a play around with the camera here.
Well that's it for now folks, Catch up again.

Thank you for visiting and please come back, Arlene, Tango and Ruby
Posted by Arlene at Wednesday, August 15, 2012