Thank you for visiting and please come back, Arlene, Tango and Ruby
I’ve got some friends coming round for tea and a game of cards tomorrow, so I decided I’d bake a Victoria sponge, I usually make an ‘all in one’ so I got all the ingredients sorted out and proceeded, Not long before-hand I’d called up the PDSA and asked if they’d come round to collect rather a lot of stuff I’d been collecting for them and had a good clear out. so I had that on my mind.

Anyhow I mixed the eggs a bit, and put the sugar and butter in the bowl then realized I’d used a traditional method so I creamed them than added the eggs, I saw the baking soda and realized I hadn’t sifted it with the flour, so stirred it in, As I was mixing the mixture I thought it seemed a bit sparse, and realized I hadn’t added the flour., added it, as I went to add the milk I decided to add a little powdered milk as I only had semi skimmed and it should have been full cream, However I put the stuff into the tins and into the oven setting the clock, hoping the PDSA man wouldn’t come for at least half an hour, Ten minutes to go, he turned up, as there was 4 bags of stuff, I had to help him he must have been wondering why I was tip toeing around and closing the door ever so slowly, Got him on his way, quick check on the cake, looked OK,left them in an extra minute just to make sure, that’s why they’re a fraction brown,  timer went off, tested them and believe it or not, they were OK, nothing startling but passable with a bit of icing sugar hiding the bubbles , Ha, ha, 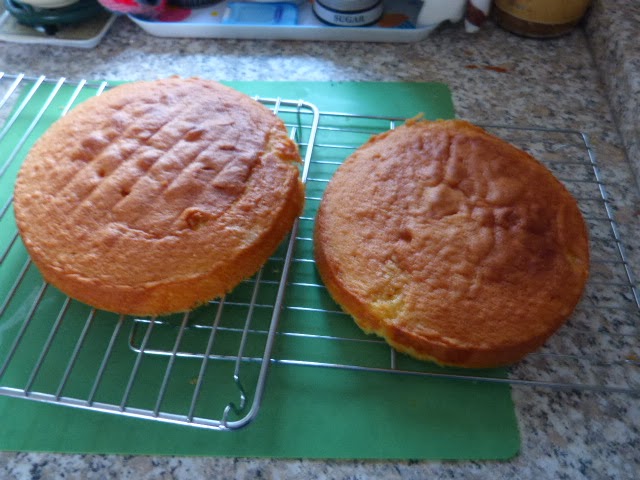