How often the old dog had heard that said, at the end of a good walk?  ' OK we’ve had fun now it’s time to go back home and get some work done' , and it was done with good grace, as Mum’s word is law.
On this occasion he couldn’t quite make out where the voice was coming from, he couldn’t see her nor  was he aware they were out walking, perhaps it’s another dog being called. So the old dog lay reminiscing. Mum had gone out without him this time.

His mind went back through the years, his legs twitched as he was a young dog running free with his companions, There was big bold Tarc, we always felt safe when he was around, then bossy little Whisper, always wanted to do things her own way, he was  happy just to go along with whatever they wanted to do,  but boy did we have a lovely life, lots of walks, swims, how he loved splashing in the sea, when the ball was thrown and he brought it back halfway then Tango took it out his mouth and fetched it the rest of the way, as he didn't like to go in deep., travels to dog shows, meeting up with old friends, making new ones, no demands, eat, sleep and play, it was a dog’s life.

The others had to work for their living, doing clever things at the shows, like finding things and fetching other stuff, staying in one place for a while everyone went away, but  Mum said I wasn’t cut out for it so I was what they call a passenger, BUT I had to do what I was told when it came to the commands  of   ’indoors, or when the walk was over  ‘Home dogs, time’s up’  and it was immediately.
I didn’t mind as there was always a biscuit when we got there.

When Tarc and Whisper went on the last walk over a place called Rainbow Bridge, Tango came along, he was a little squirt of a thing, I felt so big and bold next to him, we became the best of friends.  . He was awfully clever  and  got lots of prizes for doing things that I just couldn't understand, but Mum never made me feel bad about it, she said she loved us all equally.  We had such wonderful times together.

I noticed lately I’ve been slowing down and not running as fast as usual, and get awfully tired, some days I just don’t feel like going out, though when I do it’s not too bad, but am glad to be home again where I can curl up and have a sleep.

Once again he heard the voice ‘Home Jet, times’ up. I looked around for Mum, ‘Come on lad, she’ll be all right ‘said the voice.
The old dog gave a sigh , he understood now., had one last look around and closed his eyes for the last time.

At that moment the woman was coming back from the walk with the others, and by the gate saw the black dog , ‘Jet, who let you out’  she cried, the dog gazed at her with eyes full of love, twitched his tale and disappeared into the woods.  She knew. 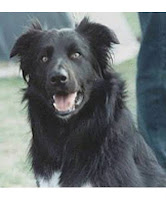