Hi All I'm so sorry I haven't had a chance to get back to some of you lately, but apart from the discomfort of this shoulder I am just so tired, as the pain is bad at night, waking me up each time I want to turn over in bed. It's been a regular aking at intervals of two to three hours, and as you shouldn't take anti inflammatory tabs on an empty stomach, I get up and have a biscuit and some milk. , than feel bushed next day.

I haven't had any feedback from the X Ray, so i take it that there is nothing sinsister going on there, and I have the physio on 10th August.

The pain isn't too bad during the day, so long as I am careful in what I do, the other day I reached up to the top shelf to bring down a bowl, and my arm locked on the way down, Gordon Bl**y Bennett, was it sore, it gave a sickening click and unlocked. Pass the smelling salts. Anyhow, I don't want to keep on about it, suffice to say it's the reason I haven't been around, though I have managed to catch up with some gardeing due to the beautiful weather.

Today I uploaded all my videos from the camcorder,all 222 of them, I haven't looked yet as I have the laptop going at the same time and took the opportunity to catch up while I was waiting. Unfortunately I have to go out shortly, It's my grand daughter Lisa's birthday today and we are gooing out for a Chinese tonight, I have to leave here 5.30 and the dogs have to be taken out first, so hopefully I'll be able to have a lazy day going over the videos to-morrow.

i've had Sue's Nettle for a couple of days while Sue did some overtime, Nettle had been spayed and she didn't want to leave her for such a long day.

I'd saved this as a draft as I didn't have time to finish it as I wanted, and I'm swearing like a trooper, all the videos I uploaded haven't worked! I can't open them, a wasted day, damn.

I decided to have another go to-day as it was raining, and tried it on my lap top, and guess what? I think I may have succeeded, so if I have....... with any luck I might be able to show them, that is, if I can sort out how to, always the optimist that's me.

There was a slight change of plan for Lisa's birthday, Martin her dad, decided we should go to the beach instead, and buy a Chinese, so off we trundled, with flasks,chairs, blankets and Uncle Tom Cobbley and all, I met them at 7 pm and we stayed till 10pm, we had to be out by then as they shut the car park gates, we went to Hengistbury Head, I of course, forgot to take the camera, and tried to take a couple of photos on the mobile, oh dear, many were not too good, but I've put a couple on here just to show the mad family I belong to.

The evening finished with a fireworks display at Bournemouth which was about 8 miles away, little Tommy was quite fascinated, it was a good, though different evening, memories are made of these silly thinks though, aren't they? Off into the garden now for a little inspection as it's stopped raining, then out with the dogs, Catch up with you all asap, promise.

ON THE SAND DUNES
Lisa's Birthday party
and slapped wrist, I never took a pic of Lisa because she was behind me. 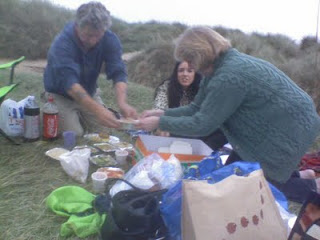 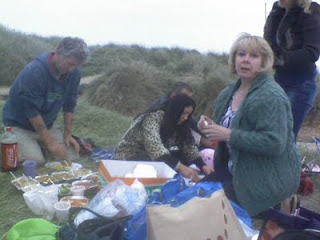 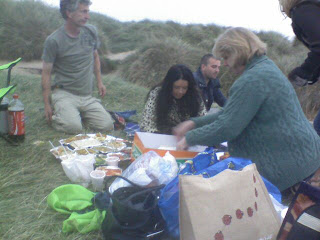 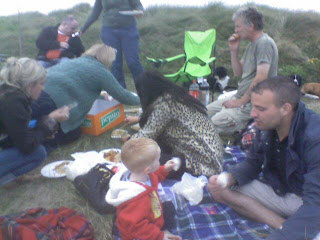 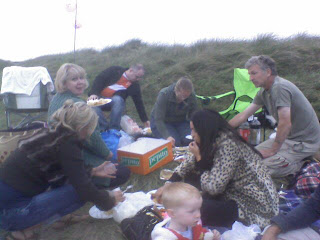 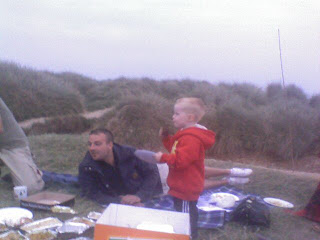 Little Tommy with Ross, Sarah's boy friend
The pics are a bit grainy and out of focus, sorry,
Thank you for visiting and please come back, Arlene, Tango and Ruby
Posted by Arlene at Saturday, July 30, 2011