I have called this post SPITE, as I can't think of anything else that would fit. Let me explain.
My grand daughter  Lisa was showing me some photos and we came across a rather tattered looking picture of a couple on their wedding day, the picture had been cut through the middle with pinking shears but had been lovingly taped back, covered over with cellophane with a piece of lace attached so it could be hung up, I felt a pang of sorrow, it was my first husband and I taken on our wedding 26th October 1957, we were married for thirteen years and had two daughters, it unfortunately started to go wrong, we separated and then divorced. At the time. all I could think of was my hurt, and destroyed many photos, my oldest girl [also Arlene] had obviously rescued this one and mended it, cherishing it all these years. I felt ashamed of my spiteful actions and wished with all my heart I could undo a lot of the hurt and pain that was caused through the bitter acrimony of the divorce and the years that followed, I'm not saying who was or wan't to blame, it's all water under the bridge now, Rest his soul he is now dead, he never re-married and went through a bad time before succumbing to cancer.
I asked Arlene if I could have the photo and I would have it restored, which she was happy for me to do.
I also had copies for myself and my other daughter Karen.
How I wish I could mend and put together the unhappiness we put them through, children are just so blameless in these circumstances, but are the ones that suffer most, I'm not saying that it would have made my marriage work, but I often wish I could turn the clock back and have a try, maybe trying to understand a little better, or maybe just taking a different road to trying to solve the problems ? who knows, but the past we never had is as obscure and hidden as the future we cannot see. But anyway here is the picture in it's restorative state.Almost fifty four years have past since then, am I any wiser? I hope so, I don't think I would carry spite so far now. 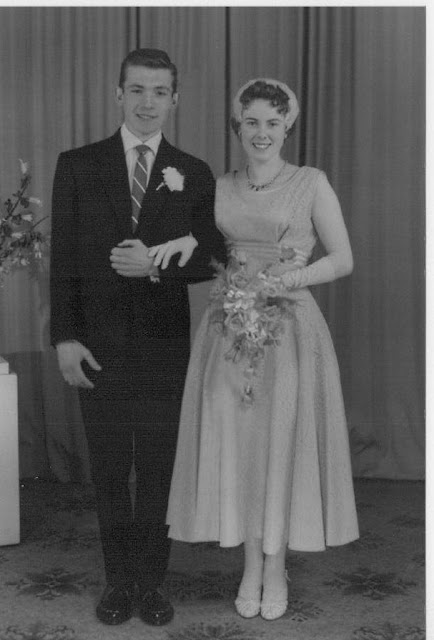 Arlene and Billy Scott
26/10/1957
I write this with tears running down my cheeks, thinking of all the wasted years, and what might have been.
As he gave me two wonderful daughters I feel I owe him this gesture.


Thank you for visiting and please come back, Arlene, Tango and Ruby
Posted by Arlene at Saturday, August 20, 2011