Hi all, well I've eventually got back from my trip to Jersey, I had a lovely holiday though it was a bit more than we had bargained for at the beginning and at the end, though the bit in the middle was good fun.
I drove to my friend's house to be picked up by taxi at 8.30 am. for the coach to take us to the Weymouth Ferry   for a 11 am sailing,  which was eventually 12 noon and that was doubtful if it might be cancelled.
What a crossing, it was force 8-9 with the sea rolling and heaving, We had to pull in at Guernsey to change as the Weymouth one had to go back as  it was wanted for the return trip and the weather was getting worse. After a wait of three hours at Guernsey we continued, though he had to change tack part way across to avoid a nasty piece of sea, There were a lot of pretty sick people, some lying on the floor and under tables, one poor woman with a baby was in a bad state. We were sitting opposite the duty free shop in a corridor, and laughed our socks off at the bottles of spirit rattling around and fallling off the shelves, the shop girl was stuffing soft toys between them to try and keep them stable.  Baskets of drinks cans went sliding out of the door, packs of cigarettes were falling off the shelves and one pack hit a man on the head, apples and oranges from the fruit bowl were rolling down the corridors then rolling back, with deckhands trying to salvage what they could as well as doling out sick bags. There were eight in our party and two of the men were bad. It was pretty grim for some.
We arrived at the hotel at 9.30pm and sat down to a full four course meal, though we had missed the first evening's entertainment,, it could ave been worse.
I will continue tomorrow as Tango is fed up with me being on this computer, I hope to eventually catch up with a few blogs and continue this one, here is Tango this evening.
Also here we are at the start of the holiday, SCOSHA stands for South Coast Scottish Heritage Association. 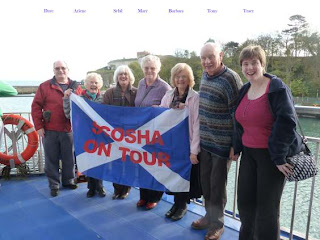 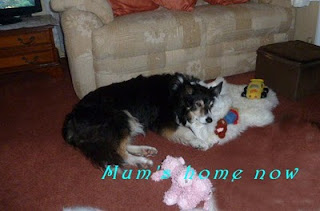