I was taking the dogs to the local Rugby club ground this morning when I saw what I thought was a rat hobbling along the side of the drive in then realized it was a little hedgehog just a baby trundling through the packed snow. I got an old dog towel from the car and scooped it up. Later when I checked on him/her I noticed blood on the side of the basket I'd popped him in. On closer look the poor little mite had a horrendous wound on it's head and the skull was showing with another smaller wound. I drove straight to the local vet and they took it in and I was told it would have to be put down as the wound was far too serious to be saved.
I took a photo on my phone just before I too it in.
What a lot of pain the poor little thing must have been in just so sad. 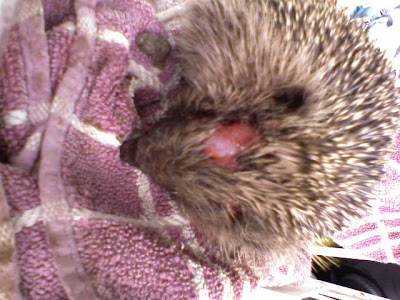