Well folks another year has gone, how fast they go when you get older,  but |I find that as each one goes by  I tend to give more time  to reflection. Sad isn't it, However it's not all maudlin, sometimes it can be funny, it can be humbling and it can in my case, as in many others, you can look back with a sense of gratitude on how your lives may have improved over the years. Now I don't know how you feel, but for all the moans and groans about the government, the banks, the crime etc, I think the world is a far better place for us than it was for our grandparents, even much better off than when we first got married or left the nest.  Now I'm not talking about the people born with a silver spoon in their mouths or ones lucky enough just to be born well off, I'm talking about the average Mr and Mrs who are maybe past the first flush of youth, say in their 50's. I'm not rich by any means but when I compare what I have now compared to when I first got married, or what my parents and grandparents had. I married in the late fifties, No car, phone, washing machine, television, forget about the modern inventions such as computers, Ipods et al. just the things we take so much for granted that makes life so much easier in many ways.
Rationing was just coming to an end, so food was not exactly plentiful nor varied, there were no supermarkets , and with no freezers, far less fridges  shopping was done  every day at the corner shop. No general stores, so you did the rounds of the butcher, baker and vegetable shops. In the butchers, whole or half carcasses were hung up in the shop where the customers queued, you had to be careful not to stand too close, not from the hygienic point of view, but so you didn't get blood on you, that used to drip onto the sawdust floor. You asked for the specific cut of meat, whether for stewing, frying or what, you soon learned what was what, and I can remember being sent to the butcher for a bit of brisket, or some gigot chops. I recall mother boiling up a calf's head and making brawn, which was in bowls on the window ledge to set, [no fridges remember?] It was used for sandwiches damn delicious it was.
Bread was unwrapped., and in Glasgow where I came from,  the bread was either plain or pan loaf, pan was the slightly more expensive, and to call someone a bit 'pan loaf' meant they put on airs. LOL, After school I'd be sent to the shops for bread and given a tea towel to wrap it, [ sometimes tore a bit off to eat], and a half a stone of potatoes, and possibly a cabbage, meat she always bought herself.
Talking of rationing, I had four brothers and a sister all older, you were allowed something like 4 oz of sweets a week, and the coupon I think was D [always remember soap was K]. I digress, My brothers conned me into believing I didn't like sweets, and bribed me with a comic for my coupons, they obviously wanted to impress the latest girl friend when taking them to the cinema. -  damn cheek.
My mother got a washing machine, a darn great hulk of a thing with a paddle in the middle, it was a days work with all of us at home. She used to cook tripe on that day,   possibly because it only needed boiling, not in the washing machine, I hasten to add, and I always associated the smell of tripe with washing suds, I used to heave, still can't bear to look at it.
When I got married no washing machine for me, though I did have a wash board, 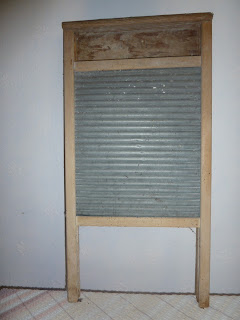 . You weren't considered a housewife till the scabs on your knuckles healed and hardened through rubbing on the board, all the nappies were 'terry cloth' and had to be boiled on the stove after washing, just think of lifting a bucket of boiling water on and off a stove every day. damn hard and risky job. Then you had to wring them by hand and hang them on a pulley suspended from the ceiling. There was no central heating then, the fire [coal] was on permanently, so clothes dried overnight., though the nappies were a bit hard, I understand now why so many babies got nappy rash.:-((

I recall when my brother's wife got her first washing machine she gave me her wringer.

This isn't mine but very similar. I was like a dog with two whatsits, as I found wringing was the hardest part of the wash. I suppose that's why I've got arthritic hands.
Anyhow folks, if you're still with me I hope you've enjoyed this little reminisce., I could go on a and tell you much more, but I expect you all have your own tales. BTW I didn't get a washing machine till I came to England and been married about four years, I first got a spin dryer, paid for it then got a washing machine.
This post was prompted by my finding my wash board in the shed when clearing out, yes, the wash board is mine, and I think it serves as  a reminder of just how lucky I am now compared to when I first got married., and puts things into perspective.
I
Posted by Arlene at Saturday, January 01, 2011