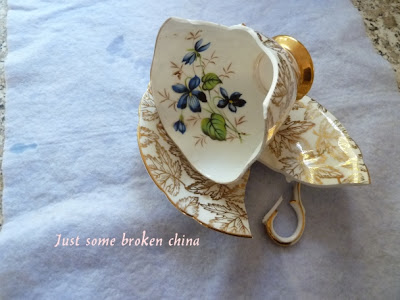 What's all this about, you may ask, Well today I was stacking the crockery away after washing up, I wasn't paying attention to what I was doing and next minute C R A S H! a pile of crockery landed at my feet, No big deal you may say, but I was so sorry to see this pretty little cup and saucer smashed.
It was given to me as an almost complete tea set of cups saucers and tea-plates [one cup missing] by an old lady who lived next door to us way back in the sixties when I first came to England from Scotland.
She was a lovely old person, Nora Brown she was called, very tiny, couldn't have been more than 4'7", she made me feel tall and I'm only 5'0",
She would always look over the fence and talk to the girls when they were little, and befriended my cat Tibby, often Tibs would spend the night in her place, Nora said it was quite the norm for Tibs to come in the window and settle on the bed.
She used to make my children clothes and often gave them little treats. I never really got to know her history, as I'm not a particularly nosy person, or maybe I'm not interested enough. :-( I don't think she ever married, I know she was very friendly with a professional couple and would often go and baby sit for them and stayed over.
As I said she was next door, but only occupied  a room in the bottom half of a house, It was as though she was poor, but when I gently told her off for being so generous to me and the girls, she always said, " I can afford it" so who knows what was her story, I often wish I had shown more interest.
She was elderly then , possibly in her late 60's/70 +, so it's too late now.
Some time ago I started using the tea-set daily, as it is lovely drinking from beautiful bone china, and it was an expensive set, being marked and numbered on the bottom, Oh well, too late now. That was the last of it apart from two tea plates.
So there you are............not just some broken china, but a precious memory, and a little part of my life, and a very lovely lady who touched it.

Thank you for visiting and please come back, Arlene, Tango and Ruby
Posted by Arlene at Tuesday, October 16, 2012