Hello all, I thought I'd try and get my brain in gear and come back to this blog, my excuses;   I have been busy, I haven't got anything to say, I just couldn't be bothered, take your pick.
Christmas has come and gone, all in a twinkling, I have had better Christmases, but I'm  not going into details, let's just say that I hope fervently that the next one will be better.
I went to Arlene's [my older daughter] where we had a nice family meal with  my little 4 year old Great Grandson Tommy taking the stage., it was probably the first Christmas he was really aware of. His presents got opened one after the other in rapid succession, without really noting what they were, but no doubt when the excitement dies down he will get the pleasure from them that was intended.
I stayed over, and on Boxing day  the rest of the family came for tea, Martin [Arlene's hubbby] myself and Tommy took the dogs for a long walk in Wareham Forest in the afternoon hoping it would tire him out, no chance, he was bright as a button for the rest of the day till I left for home at 7 pm.
Today I eventually managed to catch up with my friend Nicky, after a nice lunch and exchanging presents we took the dogs for a walk at Bolton's Bench in Lyndhurst, New Forest, it was pretty boggy underfoot and it rained, so, what's new ?? but we had a good catch up chatter.
Earlier in the day I took Ruby for a walk down on the beach, it was blowing a gale with a rough sea, but at least it was dry. here are a couple of pics.
Home and nice long bath quick cuppa and sitting down to watch the box.
I hope everyone had a nice Christmas, with nice acceptable presents, and hope that the ones you gave were well received. 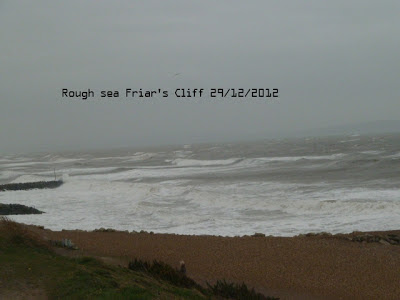 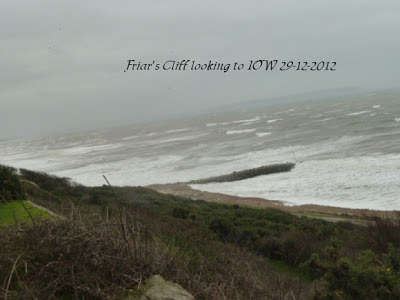 The waves weren't particularly high, but it was pretty rough and restless,
not one for boating or swimming ! 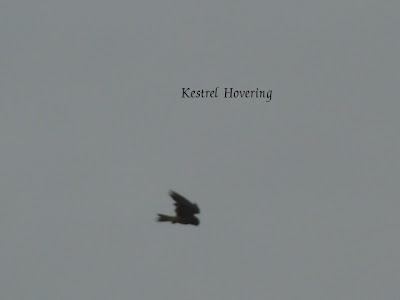 This Kestrel had a job keeping himself steady in the wind 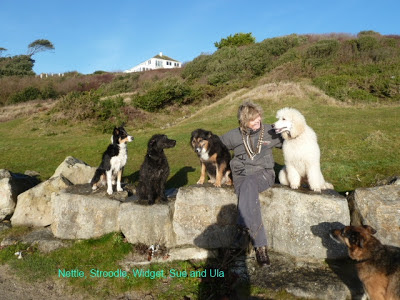 This is one on a better day just before Christmas with my friend Sue
and her dogs.


Thank you for visiting and please come back, Arlene, Tango and Ruby
Posted by Arlene at Saturday, December 29, 2012