A bit of this and a bit of that

I know I haven't done any blogging for a while, though quite a bit has happened in the past couple of months, nothing extra-ordinary, but it had taken my appetite off blogging,  also this cold weather just makes me feel so miserable.
As you may recall before Christmas October actually] I lost my little special friend Tango, Christmas came and we had a bit of a shock with a family member, which among other things lost me a fair sum of money.
Then at the end of January I lost my brother, next I had to have an operation to have a bit of sun damaged skin removed from my head, as they can be cancerous, that was pretty painful and thankfully they're sure it's all gone, here is a photo of me after the op 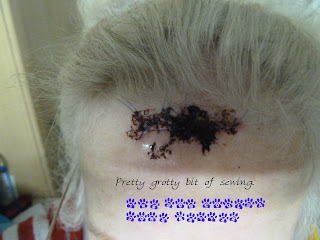 it looks like I've been shot, doesn't it.  It's taking some time to heal. About four days after the op I had to travel up to Edinburgh for my brother's funeral, My head was quite swollen and throbbed continually. It took two attempts to take out the stitches.  Just a timely warning folks, If you are fair skinned with blue or grey eyes, in fact Celtic colouring, be very careful about being in the sun. I don't sunbathe but it was enough to give me these basal cell carcinomas, It was the size of a pimple, but wept ever so slightly, a tiny secretion the size of a pinhead, but it was enough for my doc to send me to have it cut out.
Anyhow got over that lot and the other night we had a power cut for almost a whole day, no heat or light on one of the coldest days of the year. Next thing, my boiler has decided to give up the ghost. that was yesterday. Nearly forgot to mention, some scumbag went into the back of my car in the car park
splitting the bumper .Oh well maybe things will improve like the weather, which was almost springlike to-day.
Keep well and see you soon
Thank you for visiting and please come back, Arlene, Tango and Ruby
Posted by Arlene at Saturday, April 06, 2013