Well Sue’s dogs have gone home and the house seems pretty quiet, Ruby has settled back into her sleeping about 20 hours a day, she is just so chilled, or maybe it’s her upbringing, methinks that’s nearer the truth. Well as she’s eleven I don’t mind, and she does get two walks a day and plays with her ball.
Lately on dog walking  I’ve been noticing the multitudes of swallows and martens which are swooping low, skimming across the grass obviously gobbling up the flies, the other day there were dozens flying excitedly over the fields, it lasted about ten minutes, then they were gone, but only till the next swarm, beautiful but sad as we know it’s the end of summer, Wish them God speed and safe passage.
Things have been hotting up in the garden jobwise, I had an old  tree stump that I thought may be rotted enough to break up, so I had a go, until……… WASPS, yes there was a wasp nest in there, I erred on the side of caution and left it alone, called the pest controller and got it sorted. Next day I attacked it withe lump hammer, axe, gemmy and brute force, till it gave up the ghost, now I have a hole in the ground waiting to be filled. I made a start and raked the fallen leaves into it,  emptied the soil from  a few defunct plant pots, one with bulbs, and tomorrow I will get some compost, plant my bulbs and it should look OK next spring.
The leaves are falling thick and fast covering the lawn, so that’s another chore to be tackled.
My neighbour gave me some plants in pots, which I will use to fill in the spaces of the ones I lost during the hot weather. 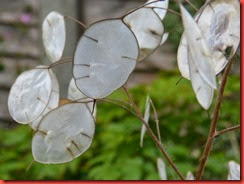 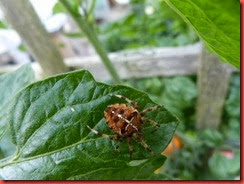 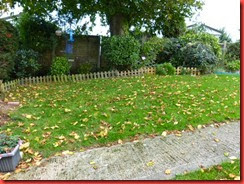 Lots of leaves on the lawn 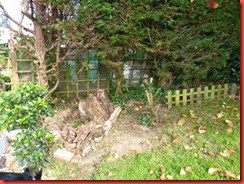 Half demolished trunk
Well I’ll close if anyone has a peek maybe you’ll leave a word or two ??

Email ThisBlogThis!Share to TwitterShare to FacebookShare to Pinterest
Labels: Musings